Posted by Daniel Currie Green at 10:40 AM No comments:

In 1994 I was in Berlin, and one day during my visit, I took a commuter train north of the city to a suburb called Oranienburg.  There I got off, and walked a few blocks from the train station to a place known as Sachsenhausen.  What I found there was field of symbols, representing conflicting stories about what happened there, and why.
The first such symbol meets the visitor at the entrance to the place, an imposing two-story guardhouse with an arched entryway underneath in which there is a wrought-iron gate.  And worked into the structure of the gate itself are bars that spell out the notorious motto of the Nazi concentration camps—Arbeit macht frei—which means, “Work makes you free.”  It is a note of historical interest that one of the notable forms of “work” to which the slave laborers of Sachsenhausen were put was the manufacture on a massive scale of counterfeit foreign currencies—English pounds, Swiss francs, American dollars.
And this single fact encapsulates, in a way, the whole world of the camp, and of the Nazi state of which it, and other camps like it, were the quintessential expression.  It was a counterfeit social order, in which people were punished and killed for that which was no crime, in which the “work” which supposedly made them “free” had no productive or beneficial purpose, in which the whole system, which was supposed to be saving civilization from barbarity and chaos was in fact a vast and barbaric criminal enterprise.
We can see this now with no difficulty at all, having the 20-20 vision of hindsight.  The Nazi system and its demonic ideology is long vanquished, reduced to rubble, and so is the counterfeit worker’s paradise that took its place.  In the center of Sachsenhausen a massive granite column built during the Communist East German period.  It is both a memorial to the thousands of leftist political prisoners and Russian prisoners of war who died there, and a monument of victory, celebrating the Russian army that liberated the camp and crushed Fascism.  And next to the column, almost as a wry aside, was a newly-installed interpretive sign noting that Sachsenhausen remained in operation for another decade after 1945, as a place of internment for former Nazis and other enemies of the new, Communist state.
That sign was itself a symbol of victory, a claim to have woken from the nightmare of the past, in the clear day of a new liberal and democratic Germany, where the truth about Sachsenhausen could now be told.  It is a reunited Germany at the center of a pluralistic Europe, that has moved beyond the nationalistic and ideological conflicts of her history into political, cultural, and economic integration.  And this Europe is a linchpin of new global order of unprecedented productivity, opportunity, and prosperity, where work really does make you free.  Of course, more than twenty years after 1994, it is less clear than it was how lasting that order will be.  And it remains to be seen what irony people a century from now will find in the symbols it produced to demonstrate its goodness.
But in the meantime, people were making the most of that open space to transform the symbolic landscape of Sachsenhausen.  I saw this in the camp’s “infirmary,” where doctors trained to comfort and heal practiced a counterfeit of medicine, torturing living human subjects in the name of scientific experimentation.  I happened to visit that place at just the same time as a group of pilgrims from Israel was laying wreaths of fresh flowers on the operating tables and saying prayers for those who suffered there.  And in another place, on the outer wall of the camp, there was a memorial to the members of the thriving gay subculture of Berlin who were rounded up en masse and died in Sachsenhausen.  It was in the form of a giant pink triangle, the badge, analogous to the yellow star for Jews, that Nazi laws forced homosexuals to wear.

In this way, persecuted groups have turned symbols of horror into defiant signs of life.  They say we will not accept your attempt to erase the ones we love from the face of the earth.  It is too late to save their lives, but it is still possible to preserve their memories.  We may not know their names, but we know that they lived, and we know how they died.  We remember, and even honor, the instruments of shame and death that were applied to them, as symbols of our refusal to hide the truth that these were human beings, whose torture and murder no rationalization could ever justify.
The cross is just this kind of symbol.  For many centuries of the history of Christian art, the cross was a prevalent symbol, but until the later Middle Ages it was rarely, if ever, a crucifix.  That is to say, it did not depict a dead or dying man hanging on it.  This was because the cross is more than a memorial to the death of one person.  It had a more universal meaning, as a reminder that the imperial system of Rome, that was supposed to bring law and order, progress and enlightenment to its subject peoples, was a brutal counterfeit that relied on the terror of the cross to keep its slaves in line.
It was a reminder that the Romans had their collaborators in putting Jesus to death, the Jewish elite who decreed that it would better for an innocent man to die in a travesty of justice, than to allow his imagination of the kingdom of heaven to stir the common people up to challenge their subjugation.  It is a symbol of all our human pretensions to decide for ourselves who is in possession of goodness and truth and who is a threat to these, to decide who is fit to live and command, and who is condemned to slave and to die.
And it is a revelation of the humanity of the victims that such pretensions inevitably make.  The cross is a symbol of the witness that these victims bear.  When we remember the martyrs, we remember human beings whom systematic violence tried to erase, whose example of true humanity shines out all the more for being engulfed by darkness and falsehood.  We recount the gruesome details of their deaths because we wish to honor their courage, and the price they paid for standing firm in the truth.  Without memory of the manner in which they gave their lives, the truth for which they laid them down is in danger of being lost, and without that truth how can there be compassion, forgiveness, or restitution?
But the cross is not only the sign of those who died heroically in the cause of truth, whose names we hold in honor.  It stands for hope of remembrance, and thus of compassion, restitution, and forgiveness for all the countless victims of murderous violence whose names are unknown, who died for no good cause, and with no particular nobility or courage.  And such hope could only be hope in God. 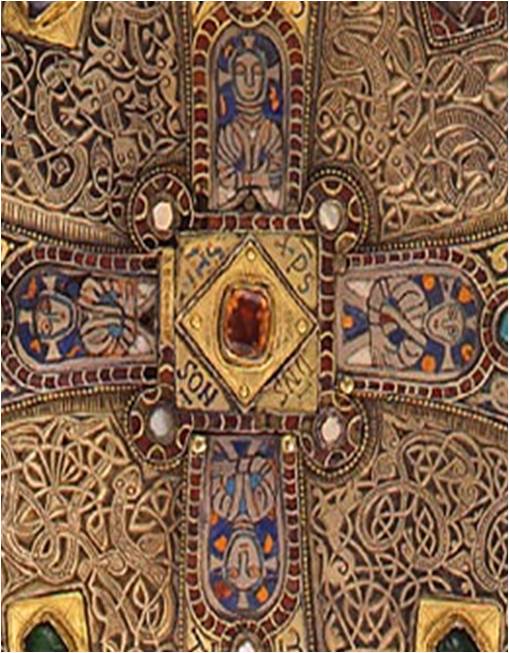 That is why the earliest crosses in Christian art, and countless crosses throughout the centuries down to the present day make no attempt to present a historically accurate representation of the cross on which Jesus died.  They are geometrical forms, often highly stylized and adorned.  Because the cross is not simply a memorial to the suffering and death of Jesus; and it is not only a disclosure of the falsehood of every rationale for terror, violence, and murder; it is first and foremost a revelation of the glory of God.  The cross is a sign of God who is life, whose love of life reached into our world of death in the person of Jesus.
Because he gave himself to the cause of life, the life that is the free gift of a loving God to all creatures, the forces of death gathered around Jesus.  Because he spoke the truth about the mercy of God, that is for the unjust as well as the just, for sinners as well as the righteous, for the poor and persecuted and afflicted as well as the proud and powerful and prosperous, they showed him no mercy.  But Jesus did not turn away from the end that meets all human life in a world enslaved to death.  He accepted its sentence, and suffered and died like all its other victims.  Yet he died without submitting to the power of death, without succumbing to fear or self-pity, or crying out for vengeance.   He completed on the cross the work of his life, of giving glory to God who is love that is unfazed by hate and life that has no traffic whatsoever with death.   And so his cross became our enduring symbol--of what death is not, and of who God really is.

Posted by Daniel Currie Green at 10:33 AM No comments: