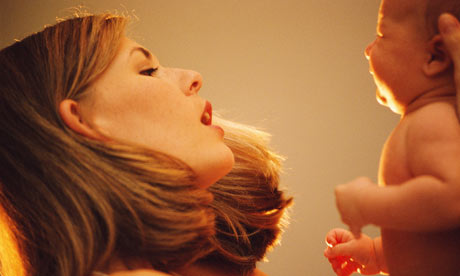 On Thursday morning I got a text message from Kate Klarkowski that her daughter Diana, who lives back in New York, had gone into labor.  Kate has checked in with me regularly as Diana’s pregnancy has come along, and each passing month has brought with it mounting excitement, but also relief.  Diana and her husband Kevin have been down this road before, only to end up in sorrow and disappointment.  But when I returned to from a walk to the store to get some things for my lunch, Jerry in the office had a message for me: Kate has her first grandchild, an 8 lb., 2 ounce baby girl named Frances Delaware.
This news made me think of another woman who finally got the baby she wanted—Hannah, the mother of Samuel.  Hannah’s husband tells her not to worry that year after year she is unable to conceive a child.  He loves her and favors her and thinks that this should be enough for her, but that is easy for him to say—he has two wives and the other has given him plenty of daughters and sons.   In those days people believed that the gift of children was in the hands of God, so Hannah goes to the sanctuary at Shiloh and prays fervently for the child she longs to have.
She vows that if God will only grant her what she asks she will dedicate the child back to him, to live a life of special holiness and renunciation.    So Hannah gets her first born son, but this gift is not simply hers to enjoy.  If we read on in the story we find it is not a heartwarming family drama about Hannah and Elkanah and their cute little boy.  It is about Samuel, who goes as a child to live in the sanctuary of God, and his call to be a prophet, who goes on to anoint the first kings of Israel.
And Hannah’s Song is more than a psalm of thanksgiving for the granting of a woman’s personal request—it is a universal anthem of human liberation.  The God whom Hannah praises is not above caring about ordinary human beings, and Hannah’s heart exults in his strength, who in giving a child has restored her strength.  But beyond that she doesn’t make a lot of claims for herself.  She doesn’t thank the Lord for answering her prayers, or her rewarding her patience.  It’s more like she praises God for revealing once again just who he is.
It’s not personal—God doesn’t play favorites.  This is just how he deals with the whole world, which he created and over which he rules with providence and justice.  Hannah is on top now, but that’s because she was on the bottom before, and she has to watch out not to get arrogant.  The Lord kills and brings to life, lifts up and lays low, makes poor and makes rich, and his justice is as immovable and as perfectly balanced as the pillars that hold up the earth.
The Song of Hannah echoes in the words of another song of thanksgiving to God, the Magnificat of Mary in the Gospel of Luke.  And as we will soon be hearing, Mary is another a woman who has improbably conceived a child.

But for Mary, like Hannah, this is not an occasion of merely personal joy—she sings of God’s mercy in remembering Israel, and his power to execute justice.  Somehow, Mary knows that her unborn son is an instrument of God’s judgment on the world, that in giving him to her the mighty are cast down from their thrones and the lowly are lifted up, the hungry are filled with good things, and the rich go away empty.  And this is in fact who the church confesses that Jesus is, the Son not just of Mary, but in the power of the Holy Spirit the Son also of Israel’s God, who’s will it is to restore the wholeness of the world, and free it from the stain of injustice and the sentence of death.
He is the Christ, the anointed priest, prophet, and king of the world, and he will be its judge.  And in fact, as the Song of Mary says, his holy birth has already given us a sign of God’s judgment.  We are already in the last days, because the judge of the world has already come.  He dwelt among us, offering reconciling justice in words of grace and works of mercy.  He healed the sick, fed the hungry, confronted the mighty with their hypocrisy; he brought the kingdom of God within reach, and proclaimed that it belonged to the poor.
And the world judged itself by rejecting him.  It condemned him to die on the cross, and so erected an indestructible sign of its own perversion of justice.  The vain pretensions of the human race to be able to straighten ourselves out—to decide for ourselves who is right and who is wrong, who deserves to get what she wants out of life, and who must suffer in silence—these were nailed to the cross with Jesus and lifted high for all to see.
But God is just, and God’s justice is mercy and forgiveness.  And so she raised Christ from the dead, as we will rise with him at the last.  God has heard the cry of the poor, has seen the tears of the mothers who have lost their children to violence, to starvation and disease, to drugs and suicide—and the tears of those who could not bear children.  God remembers, and in the end all will come to light, all will be restored, all emptiness filled, and all that hurts will be healed.  This is the work of Christ, the ministry of reconciliation for which he was sent, and which we who love the world long to see completed.
So as we come to the end of another year the question comes up again—“When?”  How long must we wait?  Sometimes it feels like the world is going from bad to worse.  When we hear about the slaughter of civilians in Syria, Afghanistan, or France, and see the misery of migrants streaming across the borders of Europe or the United States, it seems to us that inequality and injustice, violence and destruction and pollution are rising to a point where something has got to give.  Something has to change, but we’re not sure whether to be hopeful about that change or to despair.
And that is the really important question, more important than the question of “when?” (which, contrary to popular belief, neither Mark nor any of the other writers of the New Testament really cares about, or tries to answer).  We need to know whether the long arc of history really does bend toward justice.  We need to know if there really is some great purifying work of the spirit moving through all this suffering, or whether we are just beginning our descent into hell.  We need to know if all the trouble we see around us is the labor pains of our new birth in a new creation, or the death throes of a god-forsaken world.

The children who are born today will need, even more than we do, an answer to that question, because they will come of age in a very different world from the one that we were born in.  The masters of media spin tell us to measure this difference by our children’s immersion in digital media and mobile microcomputers.   But the truth is they face far more sober and painful adaptations—to stagnant economic growth and falling standards of living, to social and atmospheric instability, both of which are prone to break out in violence.  They will have to learn to do without the profligate use of fossil energy that fueled our free-wheeling lifestyles, and to do so quickly if they wish to have children of their own in a world worth living in.
They will need to learn things we have forgotten about the power that comes up from the bottom, and the wealth that grows out of the land, and the wisdom of deep cultural tradition, that is hidden in communities of memory.  They might want to learn again about a God who created a world in magnificent harmony, who blesses it and calls it good, and entrusts it to us to tend and keep.   It will help them if they know about the justice of that God, who does not play favorites, but whose mercy is over all his works.  And they might like to know that the judge of the world has already come.  Our judgment of him was blasphemy, treason, and death.  His judgment of us is truth and forgiveness, indestructible life and love.

Posted by Daniel Currie Green at 10:07 AM No comments: