What have you to do with us, you Jesus, you Nazarene? 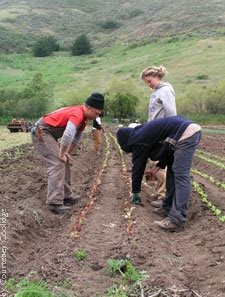 It can be painful to have somebody speak to you with authority. When I was a much younger man I lived in a Zen Buddhist community that owned and operated a small organic farm. I was the foreman on the farm crew. The Farm Manager believed passionately in the rightness of organic farming, and so did I. I did not declare publicly and often, as he did, that “farming is my religion.” I did not share his resentment of those whose work focused on Zen meditation in the temple, whom he thought under-valued the place of farming in the community’s mission. But I did share enough of his drive for perfection, and self-righteousness, and self-destructiveness, that I couldn’t see what was out of balance about him, but added my weight to it.

So we drove ourselves, hard. And we drove the people around us, too.

Most of the farm crew were sensitive and idealistic young people who just wanted to find some healing and direction by spending intensive time getting close to the earth, and to their inner lives. They hadn’t signed up for any organic farming crusade, and couldn’t quite comprehend our obsession, but they showed up every day for the hard work, and tried to respond when I urged them to do it faster and longer and more efficiently. I think some of them even tried to care as much about it all as Peter and I did. But it was never enough, and one evening, as I was expressing frustration about some work left unfinished, one of our crew who was older and wiser than the rest said to me, “y’know, Daniel—people are more important than work.” It was the voice of authority, and I’ve never forgotten it.

Power, the kind that I wielded on the farm, the crazy kind that pursues some ideal of perfection and cajoles and bullies and manipulates others into going along with the crusade, always thinks of itself as good. And because people really want to believe in themselves and that they are working toward something good, this power can mobilize incredible energy. But God always breaks that kind of power--gently, patiently wielding the authority that humbles power with truth. So empires overreach, companies get over-leveraged, leaders succumb to heart attacks, or coups, or madness. And suddenly, people wake up and realize that in the name of good they have bound themselves to the service of evil.

Jesus comes into a world of economic inequality and ethnic division, of unfair taxation and crushing debt, of imperial occupation and seething unrest. As if out of Nowhere, he appears, announcing the victory of God and the fulfillment of heaven’s just and peaceful rule.

In he walks to the synagogue in Capernaum on the Sabbath day, where people are used to going along to get along, where people go to hear the rules interpreted for them about how to stay on the right side of the line and be good so that they have honor and prosperity, rather than disgrace and poverty; the synagogue, where people go to hear comforting words, or bloodthirsty ones, about what God will do for us someday when Messiah comes, and in walks Jesus and begins to teach with authority.

It is significant that Mark doesn’t give us the content of this teaching—Mark’s Jesus is more about actions than words.

His authority is more than rhetorical art or compelling persuasion—it is the power to effect the reality he is talking about, in this case a spiritual reality.

And this authority provokes an immediate counterattack.

There is a man in the synagogue possessed by an unclean spirit, and that spirit recognizes the danger Jesus’ authority poses—it knows who Jesus is and fears him: “What have you to do with us, Jesus of Nazareth? Have come to destroy us?”

There are spiritual forces in the world that resist change, that fear the truth, that do not want God to be present and active where they are. These forces are around us and within us and the exercise of real authority never fails to arouse their opposition. Jesus’ teaching is accompanied by actions which are a provocation to the evil powers of this world, and his ministry will be an ongoing struggle to free people from their grip. This first revelation of his authority shows us the significance of all his subsequent healings and exorcisms. More than that, it sets in motion the conflict that leads to the greatest of all his demonstrations of power, his self-offering on the cross.

The power of the established religious leaders, symbolized in Mark by the settings of synagogue and temple, is opposed to the authority of Jesus, which is authentic spiritual authority. This may reflect what we would call historical truth—Jesus may indeed have experienced opposition and rejection in the synagogues of . What seems almost certain is that the author of this Gospel, and the community for which he wrote, experienced such rejection.

It has been a temptation to the church since Mark’s day to construct a tidy opposition of church and synagogue and say that God is in one, and Satan in the other, and that is the key of interpretation for passages like this one. But I hope we know better than to make that move.

I wonder, rather, whether we can receive this gospel as a challenge to our discipleship, and a test of our community. Can we imagine Jesus present today in this synagogue, teaching not as I do, but with the authority of God? Would we acknowledge his authority over those forces that hold us in bondage? Do we invite and encourage him to drive out of us all those complacent opinions, defended prejudices, repressed desires, and devil’s bargains that diminish our life and impair our freedom? Or do we want to keep Jesus where we can see him and control him, admiring our image of him, but denying his power to transform our lives?

In the gospel the religious house is a place of conflict, because it is a place of power. The power of God’s light of beauty, truth, and love is concentrated here, and where the light is, there the shadows gather. God’s house is a place of conflict because God wants us to change, and change is never easy. Change involves conflict because we are not just meant to change privately, as individuals, but to change together. Jesus doesn’t merely call us to celebrate and praise him for his saving grace, but also to grow into his stature, in the quality and range of our relationships, and in our capacity to make true and lasting community. This house is meant to be a place of spiritual struggle, where we learn to exercise authority rooted in the rule of God, which is love.

While we can choose that kind of authority, there is no shortcut, no technique to making it ours. It can only grow in us, like a seed germinating in the dark, by the gift of God. When we reach out to grasp it, we stumble. More often than not it grows in us only when we have been convulsed by the departure of some unclean spirit that held us captive. It is a tool that works on us as we try to wield it, a journey homeward that takes us where we do not want to go. When we see it happening, it is amazing.

The power of Jesus is the power to silence the fury of the world, the power to cast out the lust for power and the thirst for control, the insatiable urges of restless anxiety, to cast fear, enmity, false pride and despair. It is the power to heal others, and to set them free. Jesus wants nothing more than to give that power to us. All he asks is that we follow him, and follow him all the way.

Posted by Daniel Currie Green at 9:53 AM No comments: