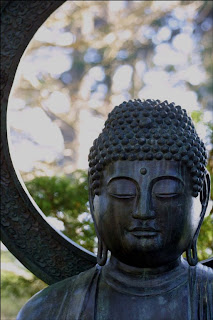 My profile for this blog identifies me as having made, at one point in my life, a commitment to the Buddha way, and tacitly (and correctly) implies that I have not repudiated that commitment. So I was interested, and uncomfortable, to hear one of my sisters in Christ suggesting last month that the recent nomination of a “lay-ordained” practitioner of Zen meditation to be Bishop of Northern Michigan in the Episcopal Church is a sign of the death of the church. I didn’t get a chance to follow up with her and find out more about what she meant—indeed, lacking any knowledge of the circumstances of the case, I just kept my mouth shut. When I got home I did an internet search and learned a little more about the controversy, which turns not to be a simple question of the fitness of a Buddhist meditator to occupy the seat of a Christian bishop, but also involves canonical issues about the manner of his nomination and election. Nevertheless, it is the Buddhist connection that raises the emotional temperature and makes for the eye-grabbing headlines, and the outcry (such as it is—so often these ecclesiastical fracases arouse passions in the few that one wishes were spent on causes of actual importance, and justified indifference in the many) has put me suddenly on the defensive, if only in my own mind.

Nobody has asked me for my opinion about this affair, but then again, why should they? Besides my overall obscurity as a junior clergyman in an out-of-the-way place, I don’t make a big show of my Buddhist credentials. Indeed, I don’t really consider myself a Buddhist anymore, if I ever really was. And because I was baptized some years after my initiation into the Bodhisattva way, my story could, one might assume, fit quite neatly into a narrative like: “I was wandering lost in the wasteland of false religion (Buddhism) until Jesus found me, and then I came home to a true and living faith (Christianity).” And, indeed, if you told my story that way you might not really be that far from the truth. But there are some crucial variables that determine whether you’d be right or not.

The first one is, what exactly was false religion about Buddhism for me? Was it that the Buddha and his successors have taught erroneous doctrines? Well, no, actually I don’t think so. Was it that Buddhist ethics, philosophy, psychology, ritual and discipline are incapable of producing wholesome transformations in persons and communities and leading toward the realization of the human spiritual destiny? No, not that either. I can’t speak for any one else in the world here, but Buddhism was false religion for me because I had unfinished business with Jesus, with God, with the Bible, with Judeo-Christian civilization and the Euro-American heritage that is my cultural, psychological, and religious blueprint. And in avoiding that business, there was a quality of play-acting about my spiritual intention and practice.

But that doesn’t mean I didn’t profit immensely from my seven years of concerted effort in the realm of the Buddha, and I still profit from it. It doesn’t mean that it was a waste of time or that I reject either what I learned from it, or the people who I learned it with, many of whom continue laboring in that vineyard. I know that there is profound and liberating truth to be found there because I tasted it, and that taste is what converted me, by the grace of God, to taking Christ seriously. It was the purification of intention, the studious application of the mind and body to the truth of each moment, the solid grounding in the rhythms of communal spiritual discipline that I found in the Buddhist monastery that broke through the hard covering cutting me off from God. The conviction that the way of Jesus had to be just as liberating and profound, and more so, because it is engages more of the totality of who I am, was my lodestar for many years. Because, truth to tell, that wasn’t always apparent to me from my experience. While I recognized immediately in my first forays back into church that I was returning home, it was a home I had never lived in, full of strangers. I held onto my intuition of the richness and meaningfulness of the Christian life by analogy with my Buddhist religious experience, and that kept me going until I began to recognize the distinctive gifts of the Holy Spirit in my life, and found my way to follow Jesus.

Which brings me to the second critical variable that confirms or invalidates the classic version of my “conversion” story—the part about a true and living faith. The way I see it, anyone can make an idol out of tenets of belief and fence them around with high walls of exclusivity, fortified with self-righteousness and a pitiless need for certainty. But that is different from a true and living faith, which is always a dialogue between the Truth as it is revealed and transmitted through the community of tradition, and the persons-in-community who are trying to live it and work it and pray it every day right now. And that dialogue is something organic and dynamic that thrives on doubt and questioning, on dismantling and rebuilding, on stretching and synthesizing. That was as true for Jesus and Buddha as it is for us. Their genius, from a human point of view, was that they were willing to radically re-think and re-work their religious traditions, so radically, in fact, that rather being seen as reformers of their respective religions, they come down to us as founders of something entirely new.

While I made a conscious decision in 1994 to leave Buddhism behind and apprentice myself to Christians, and I no longer venerate Buddhist icons or read Buddhist scriptures or attend Buddhist retreats, it wasn’t because I repudiated these things, but because I knew that I needed to learn the language of a true and living Christian faith the same way you learn any new language—by immersion. So I am still learning to pray the Psalms, to study and meditate on the Bible, to celebrate the Holy Eucharist and to proclaim by word and example the good news of Jesus Christ. At this point I feel at home here and know with excitement that this journey is taking me farther than I could have imagined when I started. Yet I have deep and abiding respect for the way I have come, and know that there could have been no shortcuts. My Buddhist years are a crucial, indispensible part of my spiritual autobiography, and not merely because they’re over. They continue to bless my life every day with their own particular gifts, and I would be a poorer person, and a worse Christian, without them.

So I think I’ll keep it in my blogger profile, that part about the being the lay Zen initiate, if only because it says something about the kind of Episcopal priest I am. Some would say “liberal”, even “unorthodox” because in their minds my refusal to repudiate that part of my past is a sign of a “watered-down” faith. But for me it speaks of a mystery, a divine mystery at that. The theologians and teachers of the Church have yet to really do justice to this mystery, and this may be because I’m not sure abstract doctrinal definitions and systematic categories can do much to explicate it. It is a mystery centered on the third person of the Holy Trinity, the Holy Spirit, and the Church (especially in the “West”) has never done a good job with Her. Our theology, forged in the fires of controversy and tested by erroneous doctrine, has tended to create a fortress/prison of positive absolutes, but the Holy Spirit blows where she will, and her work is hidden, only discernible in the who and what that happens, in the living, breathing dialogue of faith.

The mystery I speak of is the Wisdom and Providence of God in offering salvation to humankind in more than one way. Actually, that in itself is not a mystery—it is very easy to understand. The mystery is that God could send “His” only-begotten Son, the unique Incarnate God-man, Jesus Christ, the “only name under heaven given to mortals by which we must be saved” and that this could be completely true, and at the same time, there could be a path of salvation in the Buddha way, in the way of the Vedas and Upanishads, in the way of Islam, and yes, even in the path of the Torah. It will require more blog posts to entertain this question more fully, but I firmly believe that as Christians the most we can claim is that Jesus is the Way, the Truth, and the Life, and that no one comes to Father except through Him, and that in this truth we have found saving grace and the forgiveness of our sins. We cannot claim on that basis that those who follow other paths are damned, or liars, or ignorant, because we have not followed those paths. To do so would be to twist the words of Jesus into a weapon he never intended to wield.

Posted by Daniel Currie Green at 11:00 AM No comments:

Through a glass darkly

Spiritual direction of community and individuals

The mission of this parish would be congruent with, but not limited to, my two “outside” ministries.

Leading retreats for laity and clergy in retreat centers, seminaries, and parishes.

Participant in ecumenical, interfaith and interdisciplinary conferences and dialogues on topics such as: Sacred Text and Silence, Chant and Meditation, Prayer and Social Action, Spiritual Anthropology and Cosmology, Universal Religion and Local Practice, Embodiment—Personal, Cultural and Ecological.

This effort would have no distinct institutional boundaries, so would be potentially global in scope of mission, but would focus on several nodes of connection and organizing:

Posted by Daniel Currie Green at 3:31 PM No comments: