Last Tuesday, as I usually do, I drove my daughter to her piano lesson after school.  There’s a comfy leather couch in the front room of the teacher’s house, where parents are welcome to wait while the lesson is going on.  I had brought some things to read over before the vestry meeting that evening, but as I was sitting down I saw a magazine on the coffee table.    What caught my eye was a single word splashed across the cover page, a word so ideologically-loaded that it is hard to say it without a certain discomfort.  Maybe that’s why we so often prefer not to mention it, even though it is the dominant cultural force of our existence.   The word, as you might have guessed, was “Capitalism.”
So I opened the magazine to the cover article, and was startled to read, and I quote, “The U.S. system of market capitalism is broken.”  Intrigued, I read on about the growing concentration of wealth and its investment, not in the expansion of productive business activity, but in debt-fueled speculation on existing assets such as housing, stocks, and bonds.  Across every industry from banking to auto-makers to computers and telecom, the focus has shifted from developing new enterprises that create new jobs to making more money from money.  The result: an unstable and anemic economy that provides astronomical fortunes for hedge fund managers, Fortune 500 CEOs, and large shareholders, and diminishing returns for everyone else.   It is a system, the article concludes, that needs a “lifesaving intervention.”
What was really surprising about this article was where I found it.  It’s not as if the story it tells is news.  They proclaimed it at Occupy encampments all over the country in 2011 and 2012, and the political establishment and its media outlets jeered in disdain.  Armored police drove the Occupy protesters out of the public squares, but they must have scattered like sparks on the wind, because now, five years later, their message is on the cover of Time magazine.

Naturally, the Time article was quite narrow in what it was willing to admit about the crisis of Capitalism.  It touched only lightly on the political crisis that is engulfing the system because of its corruption and inability to reform itself.  It said even less about the moral crisis of a system in which 31% of children in the District of Columbia do not have access to a reliable supply of food.  And it said nothing at all about the ecological crisis of Capitalism, epitomized by the fact that it would take 3.9 earths to sustain the world’s 7 billion people at the level of consumption of the average American.
But, be that as it may, the idea that the Capitalist system is fundamentally broken must have penetrated far into our society, if Time magazine can put it on the cover as the simple truth.  And when an idea that once was unthinkable is suddenly accepted as obviously true, it liberates enormous energy for change.  In 1985, when Mikhail Gorbachev was finally ready to admit what everyone already knew, that the economic system he oversaw was no longer functioning to meet the needs of his people, and he called for “perestroika” or restructuring, it was already too late.  Now I’m not saying that the United States of America is going to collapse in six years, like Gorbachev’s empire did, only that at the critical turning points of history, the great creative breakthroughs begin with changes in what people agree to believe.
It seems the editors at Time understand this, because why else, in the closing paragraphs of the article, would they start reaching for religious language?  They speak of American capitalism’s “crisis of faith,” and talk of reforming business education, “still permeated with academics who resist challenges to the gospel of efficient markets in the same way that medieval clergy dismissed scientific evidence that might challenge the existence of God.”  They remind us that our market system “wasn’t handed down, in perfect form, on stone tablets,” and call for a “reaffirmation of first principles.”
The only “first principle” they can come up with is that the financial system should “provide a clear, measurable benefit to the real economy.”  Fair enough, but we Christians have been through religious reformations before, and we have our own first principles, largely forgotten, that might prove useful at this time: “Man does not live by bread alone, but from every word that comes from the mouth of God.”  Or “do not worry about what you are to eat, or what you are to drink, or what you are to wear.  Your heavenly father knows you need all these things.  But set your hearts on his kingdom first, and its saving justice, and all these other things will be given to you as well.”  Or how about this one: “No one can be the slave of two masters: you will either love the first and hate the second, or be attached to the second and hate the first.  You cannot be the slave of God and money.”

You see, from the point of view of those who follow Jesus, the great error of Capitalism is its distorted view of human beings.  Because our true value as persons is not measured by how much we produce, or how much we consume or accumulate.  In truth it is immeasurable, for we were made in the image of God, and this is as true of the profoundly disabled person who will never have a “job” in his life, as it is for the CEO.  And we do not achieve our highest good by each pursuing his own self-interest in competition with others, but by taking Christ as our pattern, walking in love as he loved us and gave himself up for us as an offering and sacrifice to God.
We don't think nowadays, of the idea of Holy Trinity as a revolutionary breakthrough.  But it was, historically, and might still be, because it originated, not as a new doctrine about God, but as the experience of a new way of being human.  You and I experience the world through a narrow window each of us calls “myself.”  Our habit of identifying with that self, of fearing for its safety, defending its reputation, and promoting its interests, is near impossible to break.  And yet this “self,” which seems to be the single indispensable fact of our being, is treacherously unstable.   Because it learns who it is and what it wants by imitation.  It desires what the other people have.
But in Jesus of Nazareth, the pioneers of the Trinitarian faith encountered a different kind of self.  It was not that he didn’t have the individual personal characteristics.  It was that he didn’t seem to want what other people had.  To meet him was to come into the presence of person who wasn’t trying to get anything from you, but only to give you something that you couldn’t see was already yours, an indescribable fullness of being, flowing from an unseen source.  Not that this made him indifferent to the people around him.  On the contrary, he was exquisitely attuned to them, embracing their aliveness, encouraging their faithfulness and generosity, perceiving with compassion their fear, their delusion and suffering.  With flawless precision he would find the places they were bound, trapped by their traumas and disappointments, attachments and resentments, and he would say the word or make the gesture that opened the cage and gave them the chance, if they chose, to go free.

And when Jesus rose from the dead, the apostles finally began to understand that this is also the kind of person God is.  Not a jealous rival for our affections, for there is no God but God, but an inexhaustible fountain of life pouring out for the well-being of others.  They saw that God’s desire to give life and blessing to all creatures—with infinite tenderness, and absolute respect for their integrity and freedom, to speak to them in terms that they could work with, and come in time to understand—this parental love was the mysterious force at work in Jesus.  And when they looked into each other’s eyes and saw the recognition, the agreement, that this is how it really is, that same love poured into their hearts.
They received the gift of the new person each of us is called to be, not a person restlessly hunting to shore himself with what others have, but a person whose self springs with effervescent freshness from the depths of life in God.  This gift is still here for us, still working in our remembrance of Jesus, in the grace and peace of his Word and Sacraments.  And when can look at our neighbor, and our eyes meet with a knowing look that says in both of our hearts, “yes, this is really how it is,” this is the promised Spirit of truth.  It is declaring to you the things that are to come, the fullness of being we were created to share from before the foundation of the world.

Posted by Daniel Currie Green at 2:30 PM No comments: 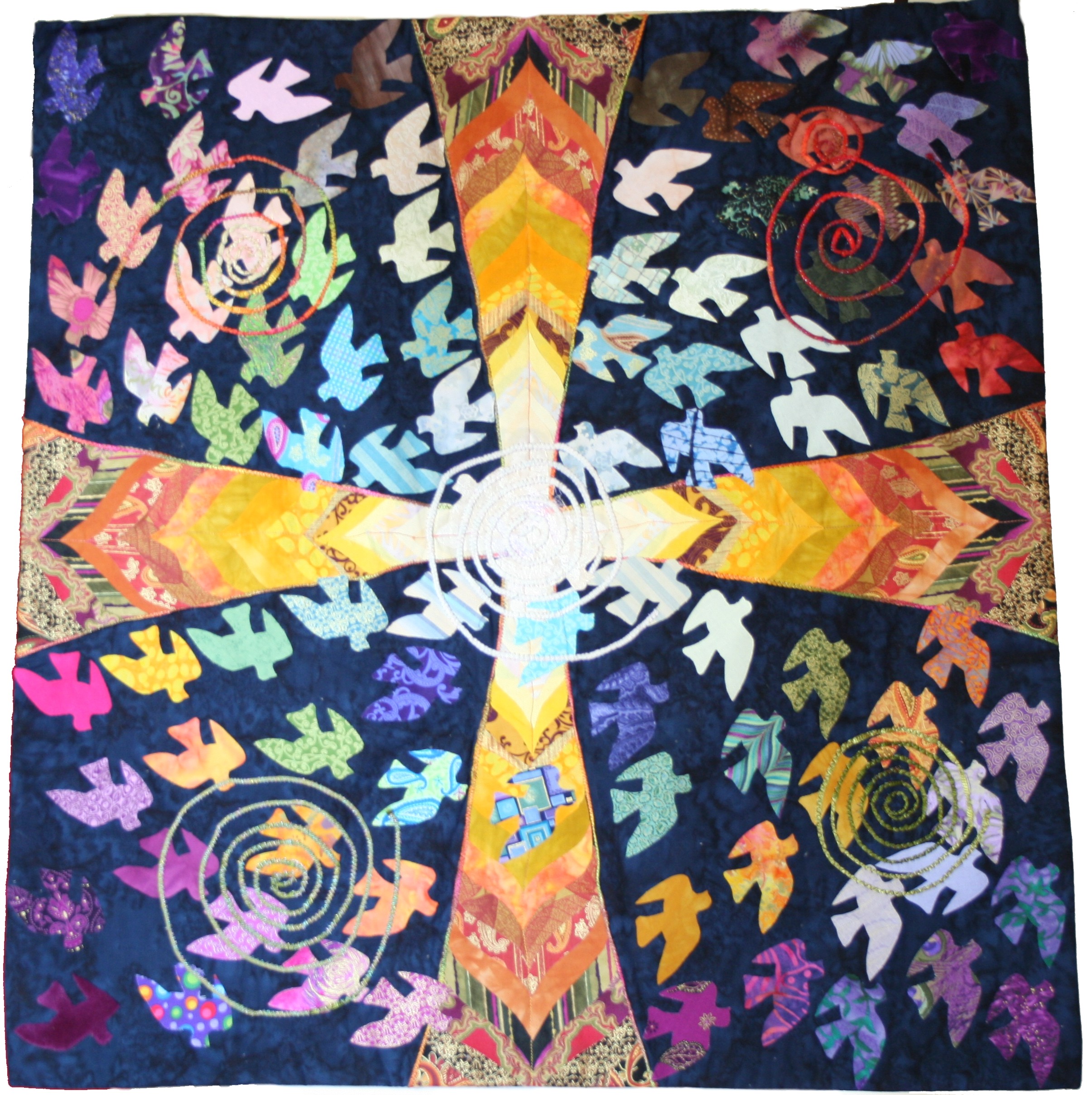