We're on a Mission from God 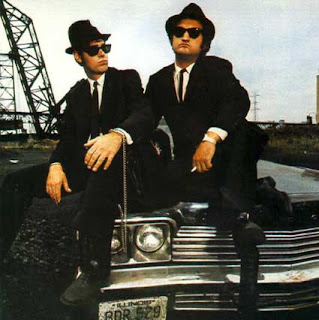 In September of 2005 I was attending my first clergy conference in the Diocese of California, at Bishop’s Ranch in Sonoma County. I had graduated seminary in May and been ordained a deacon in June. For six months I had been all over that Diocese, trying to convince someone to give me a job. There had been one parish with a bona fide assistant priest position—my upstairs neighbor from seminary got it, and I was the runner up. With a wife and baby daughter at home I was getting desperate. On the first evening of the conference, after dinner, the Diocesan Executive whose duties included finding me a job came up to me and said, “I think I might have something for you. I got a call from All Saints in Carmel and they’re looking for an assistant. It’s a great church—good people, beautiful town. It is in El Camino Real—think of it like going down to the minor leagues for a little while.”

Some things never change, and the condescension of the Diocese of California may be one of them. But my wife and I took some comfort in that remark at the time. We had both moved to the San Francisco Bay area at the age of 22, and had lived there our whole adult lives. Carmel for us was a strange place, culturally and geographically unfamiliar, and we had no idea how we would be received. But it was my first job in the church, we reasoned, and those are temporary, anyway. This one seemed like it might be more temporary than most.

Of course we came to love this place, and since it became clear at the end of last year that it was time to move on, we have loved it most dearly. And yet we knew this day would come when we came here. Partly it has to do with the natural progression of a priest’s career, and partly with the ongoing dynamics of change in this congregation. But more importantly, it has to do with what God asks us to do and to be as disciples of Jesus. This morning’s reading from Luke reminds us that being a follower of Jesus means to be on a missionary journey. This isn’t just true of the specially ordained, but for all of us. I think that’s why after Luke tells us about the sending out of the 12 apostles, he adds this story of the 72 others. The implication seems pretty plain to me—no experience is needed, no professional training offered, no minimum qualifications required, except the desire to be a part of Jesus’ mission to the world.

There was a time in high school when I was in a circle of friends whose sacred text was the movie The Blues Brothers, and throughout the movie Jake and Elwood Blues would say, “We are on a mission from God.” This is true for all of us. Sometimes this mission asks us to move on geographically, but it can just as easily ask us to stay in the same place our whole lives. The point is to keep moving spiritually, and what keeps us on a mission is the work we have been given to do, and the message we have for the world.

It is not unlike the relationship Americans have with the Declaration of Independence. When those 56 white men decided to announce to the world that governments are established by the consent of the governed, in order to secure the rights and liberties with which all are equally endowed by God, and that they intended to found a new society on that principle, they couldn’t have foreseen the result. They didn’t know that ninety years later slavery would be abolished or that 60 years after that, women would win the right to vote. The impulse to extend the scope of equality and freedom, once set loose, has a life of its own, that keeps working away in our politics and society, even when power and prosperity urge us to complacency.

In an even more profound and urgent way, the mission of Jesus Christ keeps his church unsettled and on the move. That’s what the baptismal font is doing there by the front door, reminding us when we enter that we are a people reborn and signed with the cross of Christ, and when we depart it reminds us that we are sent in his name to be bearers of a message. We don’t need a lot of stuff for this mission—credentials, titles, carefully-constructed arguments, techniques for winning friends and influencing people. What is important is what is in us, what Christ has placed in us by his grace, which is the power to heal, and the news of God’s kingdom.

This message is peace, and we understand it as peace and deliver it in peace. It is not a claim to superior understanding, or an ultimatum of any kind. It is simply the offer of peace to a stranger, a suggestion to everyone we meet that God’s love is very near, that God blesses life, that God has infinite hope for everyone in the whole world. This message is an appeal for mutual recognition, an invitation to a meeting in which we acknowledge one another as God’s beloved. And this meeting is offered with the promise that, if we open ourselves to one another in the peace of Christ, he will come to be with us, to abide within and among us, and transform our life together into a new creation. This is what I was hoping for when I came to All Saints, Carmel, and we have not been entirely disappointed, have we? You have given me many such meetings, because you are Sons and Daughters of peace, and I hope that you have experienced some of Christ’s peace through me.

I go now to a new house, a place where peace has been broken. St. John’s, Petaluma (incidentally, in the Diocese of Northern California, also the “minor leagues”) is a place where people forgot somewhere along the way that the kingdom of God has come near for everyone. Somewhere along the way, some of the people at St. John’s forgot that neither circumcision nor uncircumcision matters for anything, but that the new creation in Christ is everything. So Meg and Risa and I are going there to do a little healing, God willing (please pray that Our Lord will give me the grace to do it), and to speak a word of peace. Something about the journey that congregation has made, about the years they spent doing worship out of a box in the social hall at the Lutheran church, tells me that they know that God has sent them on a mission. That, more than anything else, is what is calling me there, so I’m going. I’ll let the Blues Brothers have the last word— Elwood to Jake: It's 106 miles to Chicago, we got a full tank of gas, half a pack of cigarettes, it's dark, and we're wearing sunglasses.
Jake to Elwood: Hit it.